As a holiday special so to speak, today I’m releasing GeDoSaTo 0.16.

The TL;DR version of the updates is this:

You can get the latest version with the installer provided here. And, as always, you can donate to support GeDoSaTo development here.

I’ve been chasing the sporadic crashing issues on and off since the release of FF13. For the longest while, I assumed that they had to be related to screenshot taking, as that was when they first and most often occured. I tried many things related to that (pre-allocating buffers, using the library in a way that causes no additional memory allocations, …) but it turns out that this was, more or less, useless, as I was looking in the entirely wrong place.

When I finally realized that, despite the issue only appearing in the FFs, it had to be a general memory leak in all of GeDoSaTo, I manually checked every single instance of new in the code for the corresponding delete . This was less work than it sounds since I try to write modern C++ where you very rarely call those directly. Over the course of this, I found a few issues, specifically  operator delete  being called instead of operator delete [] . However, since those were arrays of POD types, while bad practice and undefined behavior it wasn’t the issue I was looking for either.

Afterwards, I made a few abortive attempts to use existing leak checking tools, but like many tools designed to make programmer’s lives easier they are really hard or impossible to apply in the — very unusual, admittedly — interception use case of GeDoSaTo. It would certainly be a good idea to implement a stand-alone executable testbench at some point, but these things, they take time.

Yesterday, I finally made the breakthrough. My new approach was to fill the memory almost completely at start-up so as to more quickly reproduce the issue. Then, I got a repeated crash during loading in FF13-2. This reminded me of earlier studies of FF log files, and that it loads far more separate shaders than any other engine I’ve looked at, and some of them 3 times each. And it continues to do so heavily throughout the game, which is somewhat unusual. This lead me to looking at the shader management code, and there I finally found the culprit.

And, as is almost always the case, looking back after finding the bug it seems painfully obvious: to enable things like PSHash HuD rendering identification or injection of postprocessing or AO in the case of specific plugins, I keep a map of all shader pointers and their names (which are derived from their code so as to be reproducible across runs). However, I never remove entries from that map. As it is impossible to know when an entry is save to remove without fully instrumenting shaders (which seems like overkill for this purpose) I’ve solved the issue by adding the new  trackShaders  option. If it is not set (the default), shaders will still be identified if they were set as PSHashes or VSHashes, but only those will be tracked. The only reason to enable the flag is to look for a new hash in a new game.

So, Bandai Namco filed a DMCA complaint against DSfix 2.3 and got my Dropbox account blocked from public sharing.

You can all let them know what you think about that.

If you want to donate to my apparent future need for legal counsel, you can do so here. (That’s a joke by the way, at least I hope it is)

Apparently, this was done in error, in a wide-reaching attempt to purge the leaked debug executable from the internet. While it’s still a problem that the DMCA simply allows companies to take down arbitrary non-infringing files, at least there shouldn’t be any further issues with DSFix.

Performance tracing allows you to record the performance of a segment of gameplay to a file. There is a keybinding for it ( togglePerfTrace) which you can configure like any other keybinding (now including modifier keys!), and after recording a sequence it will output a file such as this:

The first 3 lines give general information, including the total frames measured, total duration in milliseconds and average FPS over that duration. The following 3 lines give 99, 95 and 75 percentile effective frame times. These give you a quick idea of the overall smoothness of a game.

Finally, the rest of the file is a CSV (comma-separated value) recording of each frame’s times. The individual measurements are (i) CPU time from the start of the frame to the present call, (ii) GPU time according to D3D API measurements, and (iii) effective frame time from one present call to the next. You can use this detailed data to do analysis or generate graphs in your favourite statistics tool, like e.g. this one representing frame time distribution: 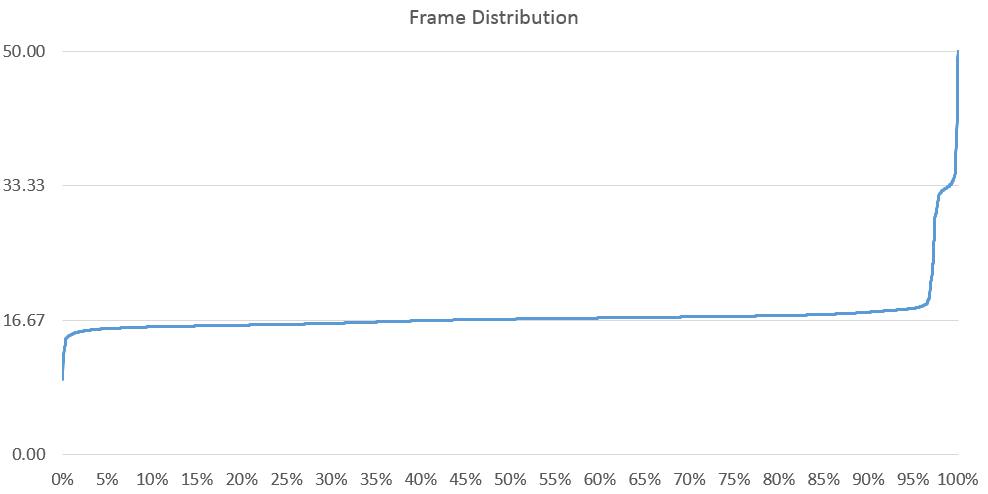 I realize that tools doing something very similar already exist, but they may not report all the information, or not be open source, or not be compatible with GeDoSaTo, so I integrated the functionality.

The Dark Souls Steamworks migration update is now live. As I expected, most DSfix functionality I implemented (which is based on API call interception) remains operational, but the framerate unlocking (based on binary hooks) does not work with the new version. This part was implemented by Nwks, so we should hope that he is still around and interested in updating it for the latest version. If not, I can try, but it lies outside my expertise and could potentially take a lot of time (which I’d rather spend on other projects). Of course, there’s also the chance for anyone else to step in, as all the code is available on github.

For now, you can use DSfix with the new version as long as you disable the framerate unlocking feature in the .ini file.