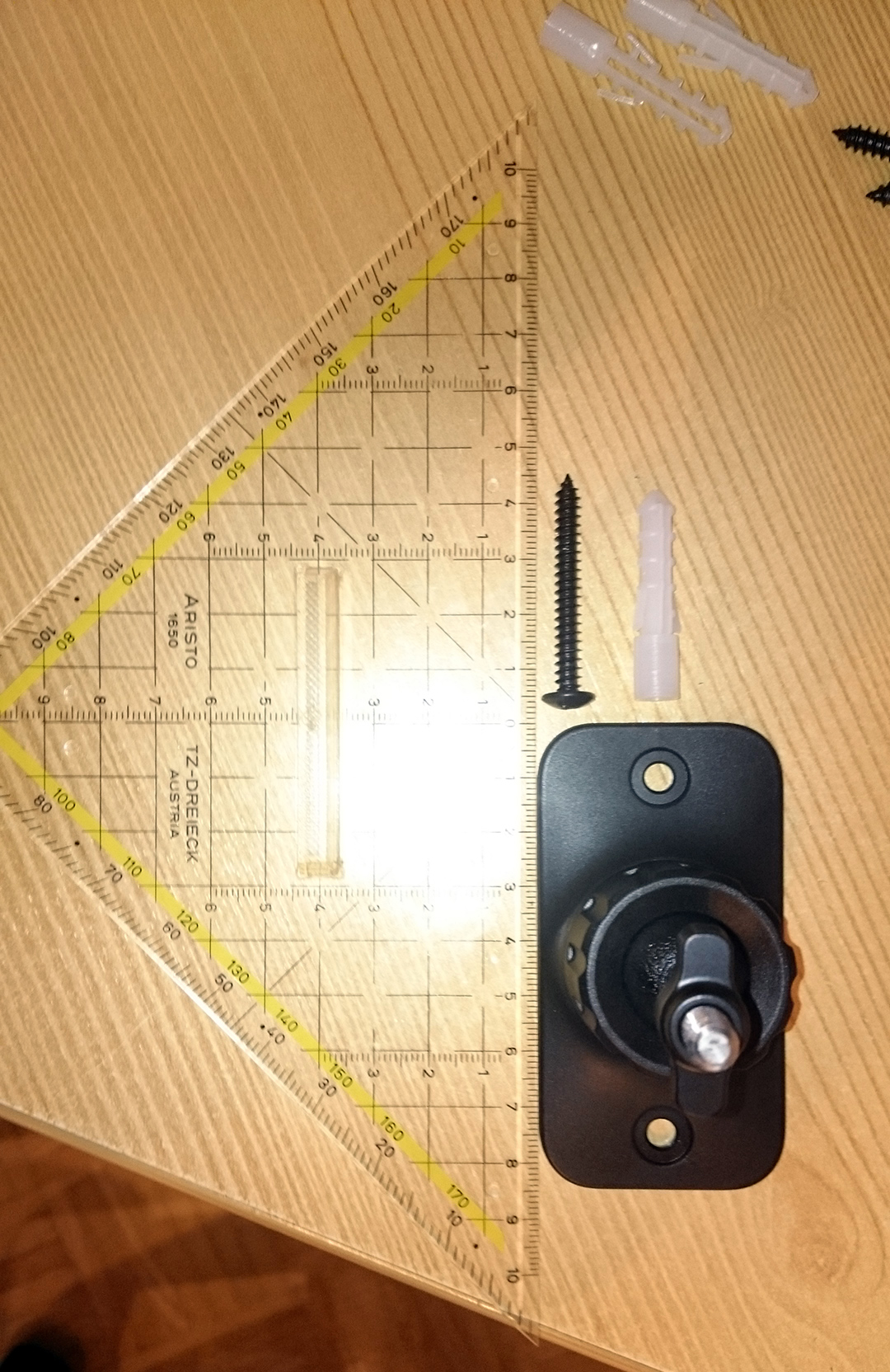 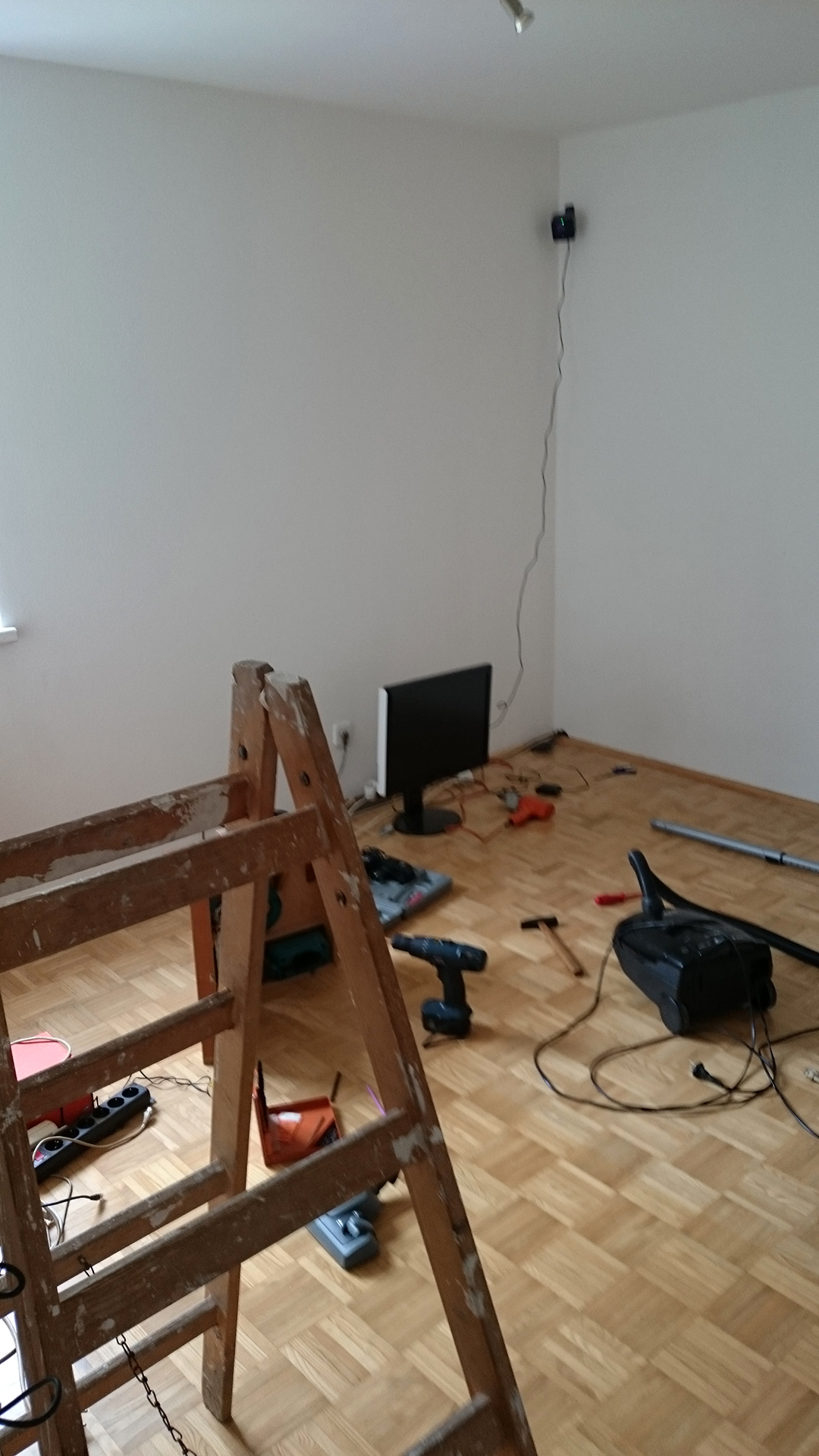 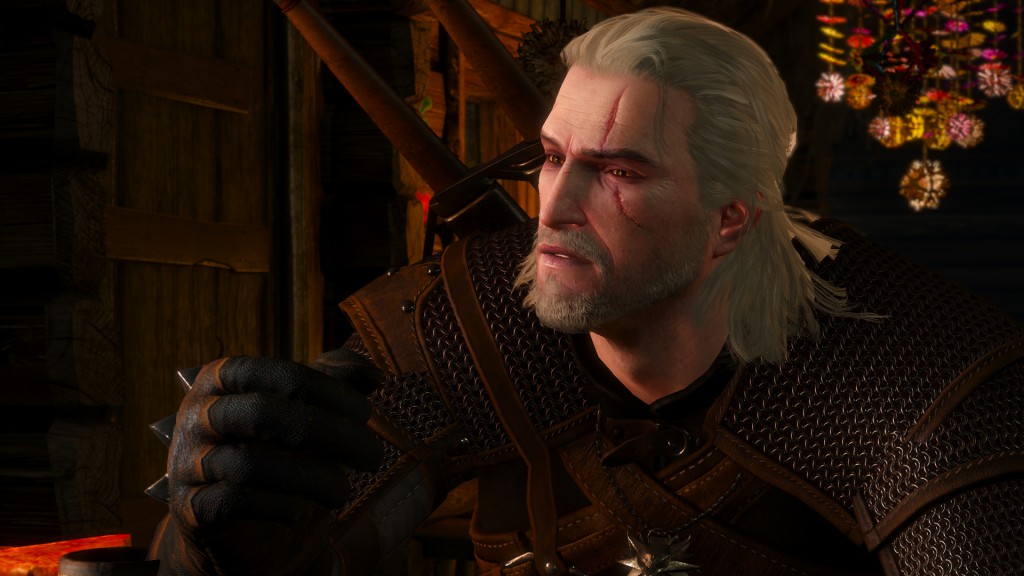 I wrote an article about The Witcher 3 for PC Gamer. I focused primarily on some tips for achieving the smoothest possible gameplay, but what I’m really surprised by is the CPU results I obtained.

I might have chosen a bad location for that benchmark, and perhaps I’ll repeat it somewhere else, but I really expected an open world DX11 RPG to be more CPU-heavy. Certainly not playable with two 2.2 GHz cores at 30 FPS and 4 at 60 FPS. Very well done, and another indicator to me that seems to hint towards the gains with future low-level graphics APIs being less pronounced than some expect, outside of very specific use cases.

Of course, that level of control will at the very least be a huge boon to VR rendering, which inherently requires a high framerate, low-latency and extremely consistent performance.

I rarely post about anything work-related on this blog (the last time was over a year ago), but I really wanted to write about this one. I’ve been a huge supporter of VR and the Rift since before the kickstarter, but the overwhelmingly positive reception when I had the chance to use it in a public demonstration still surprised me.

There is an annual event at Austrian universities called the “Lange Nacht der Forschung” (Long Night of Research). Basically, for one evening/night – starting at 17:00 and going on until 24:00 – the Universities prepare demonstrations, talks and interactive sessions about research for a general public. It’s (surprisingly?) popular, with 136500 visitors this year. There’s a great variety of visitors, students, families with their children, and even seniors.

This year, our group was asked to do a demonstration again. Since I wanted to do something which is both related to our current research and engages people I had a pretty hard time coming up with ideas. In the end, I settled on taking the result of one of our compiler analysis methods (designed and implemented by Herbert Jordan) which generates a Petri net representing the parallel execution of a program, and visualizing it in VR using the Rift.

I had a prototype up and running using OpenSceneGraph, but with the recent release of UE4 with licensing for mortals, I decided to try it using that. With just a bit over a week to go (and, it turned out, a few graph layout papers to read and 3D models to create in addition to getting used to coding for and working with a huge engine from scratch) it was a tight squeeze, and quite exhausting, but I completed it in time.

If you can read German you can find more detail here. Basically, it’s a set of nodes (2 types) floating in space, connected by “bridges” representing graph edges, and with pillars showing the ID of the related program node/construct, as well as (optional) “monitors” showing the associated code for e.g. region constructs. Here’s a screenshot: 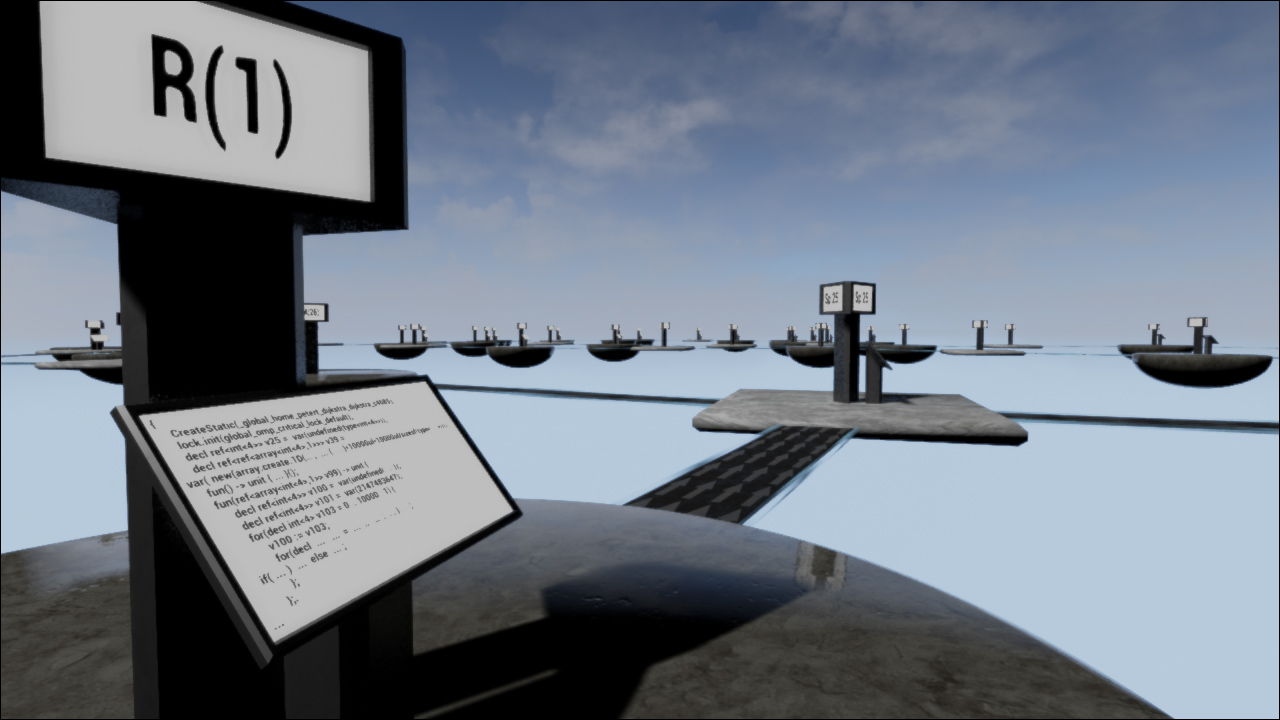 Screenshot of the Visualization (Non-VR mode)

For the actual demonstration at the event we also had a 30″ screen mirroring the Rift output set up, so that people could see what’s going on, as well as a copy of the poster I linked above to explain the context of what was being presented.

Now we get to the part which is actually interesting. I was really curious how these “normal” people would react to the Rift. I am happy to say that the overall reaction was much more positive than I expected, despite all the technical shortcomings of DK1. We had a group of people watching and waiting for their turn for the entire duration of the event (so 7 hours, actually closer to 7 and a half if you take all the time before and after the official start into account), and probably around 250 people using the Rift.

We had a wide range of visitors over all age and gender boundaries – with families, normally it would be the kids trying the Rift first and then convincing their parents or grandparents. Here are a few photos: 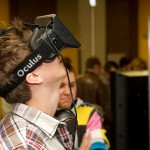 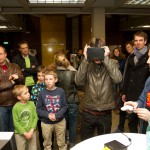 Lots of onlookers, and someone didn’t get enough sleep 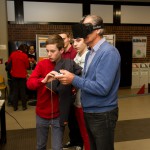 VR is for everyone 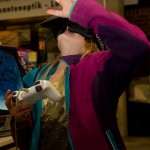 Sadly, you can’t touch things yet 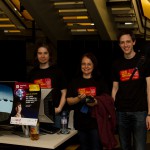 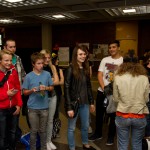 We sometimes had trouble with people wrapping themselves in the cables 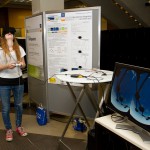 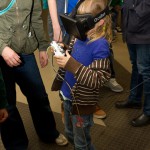 Sometimes, the Rift was almost as large as the user’s head 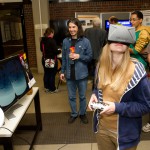 In the background you see someone grinning madly 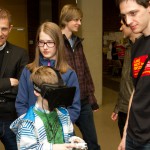 Some remarkable incidents and things of note I observed:

That’s it, pretty much. After this exhausting but fun experience I’m more certain than ever that VR will not just become big, it will do so very quickly. Oh, and I’d like to thank Philipp Gschwandtner for helping me with the demo, and for taking all the good pictures you see in the gallery above. The bad ones were taken by me.

Two days ago I received my Oculus Rift developer kit. If you’re unfamiliar with the Rift, it’s an affordable Virtual Reality headset that had a successful kickstarter for developer kits last year.

My kit had a pretty long journey, going to Australia first. I used to think that people (particularly in the US) mixing up Austria and Australia was just a myth, but it seems like it actually happens: 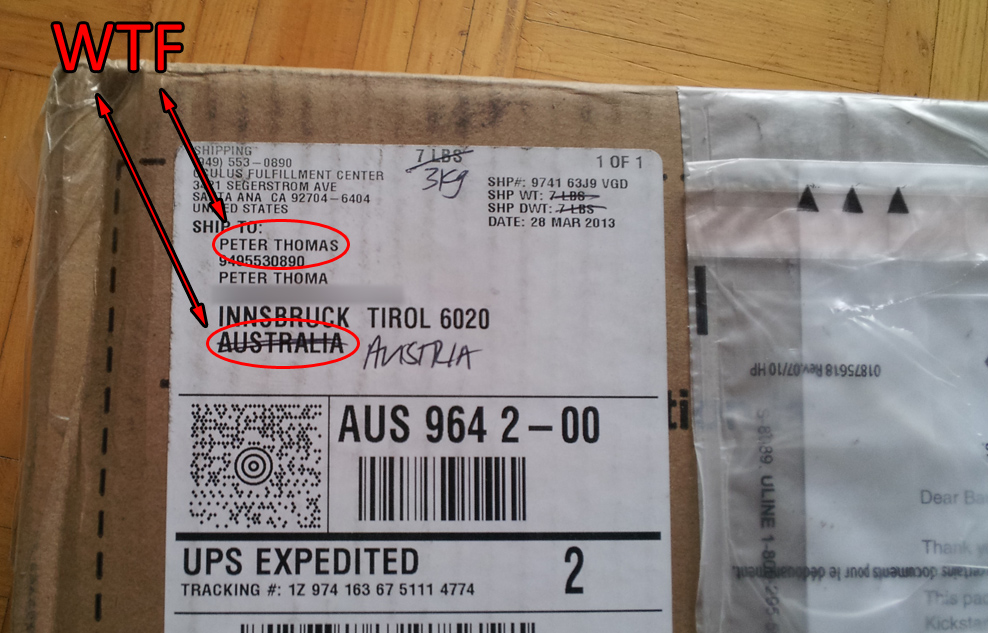 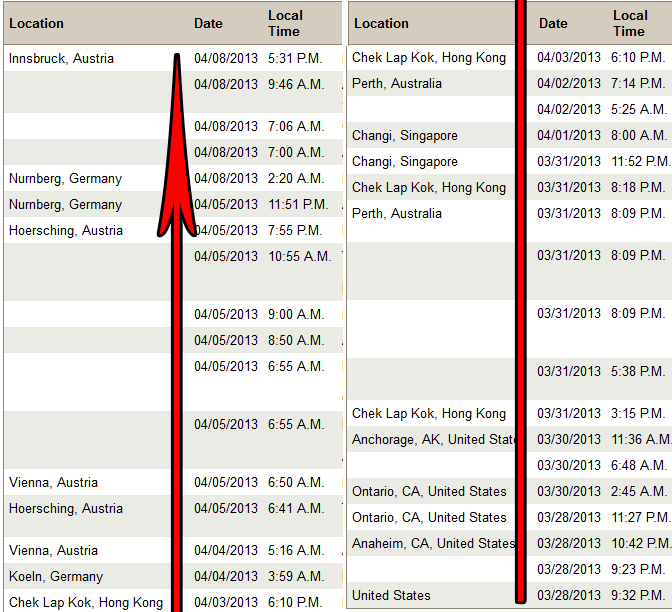 Tracking Information for the UPS order

But hey, all is well that ends well. It’s a really nicely packaged kit, and includes adapters for anywhere on earth and 3 times as many video cables as you need: 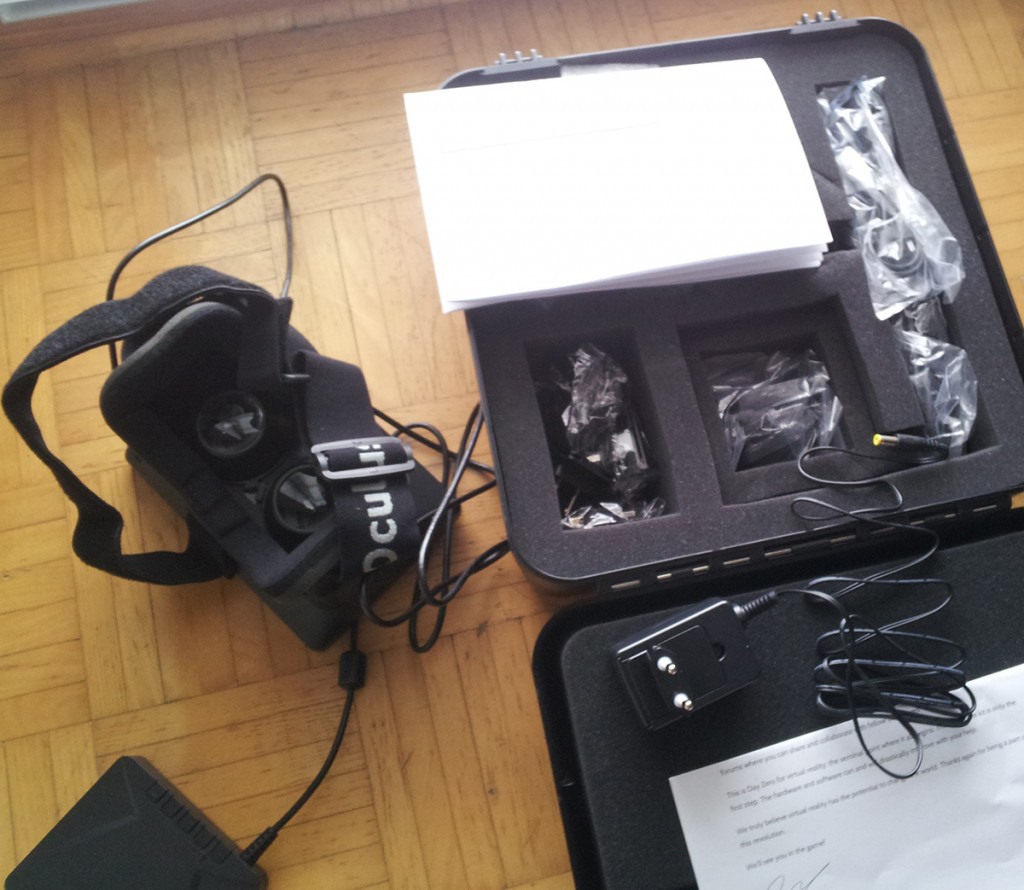 You can find much better pictures of exactly what’s inside (and the great box!) elsewhere on the web.

Sadly, I don’t have much time to do development for the Rift or even much testing right now, but here are my first impressions:

I just tested using the “Oculus World Demo” included with the SDK, and I noticed that the reaction speed and even the blur with head movement seemed significantly better with the windowed fullscreen mode instead of the “real” fullscreen mode. I’m not sure why this is the case, it could be that in real fullscreen I had VSync on.

Anyway, I hope I get more time to play around with it this weekend.