I’ve been using Windows 10 for about 1.5 Weeks now, and I thought it would be time to write about the experience, explain a few workarounds, and post one tiny tool I made to make it more palatable.

So, what has gone wrong in Windows 10?

First of all, initially it wouldn’t even boot on my X99 system. It got stuck in an infinite loop on the initial boot screen. By looking through the boot log from my old WIndows 7 installation, I eventually figured out that the fault lies with the “Intel Management Engine” driver – a component I don’t need at all. Disabling it fixed that issue.

However, I still got a black screen on boot. Turns out that Windows 10 thought it was a good idea to show the initial login screen on my projector (turned off projector, I might add) rather than the  monitor.

Talking about boot issues, the idea of removing the option to get to the advanced boot loader with a key press is really fucking annoying. Being really annoying to power users for no good reason seems to be a theme in Windows 10, as I’ve found.

In short: it sucks. I tried living with it for a few hours, but its refusal to reliably index manually created desktop application shortcuts in its search makes it completely unusable to me. Good thing I bought two StartIsBack licenses back then, and great on the author for having a perfectly up-to-date and fully compatible version out with the Windows 10 release. 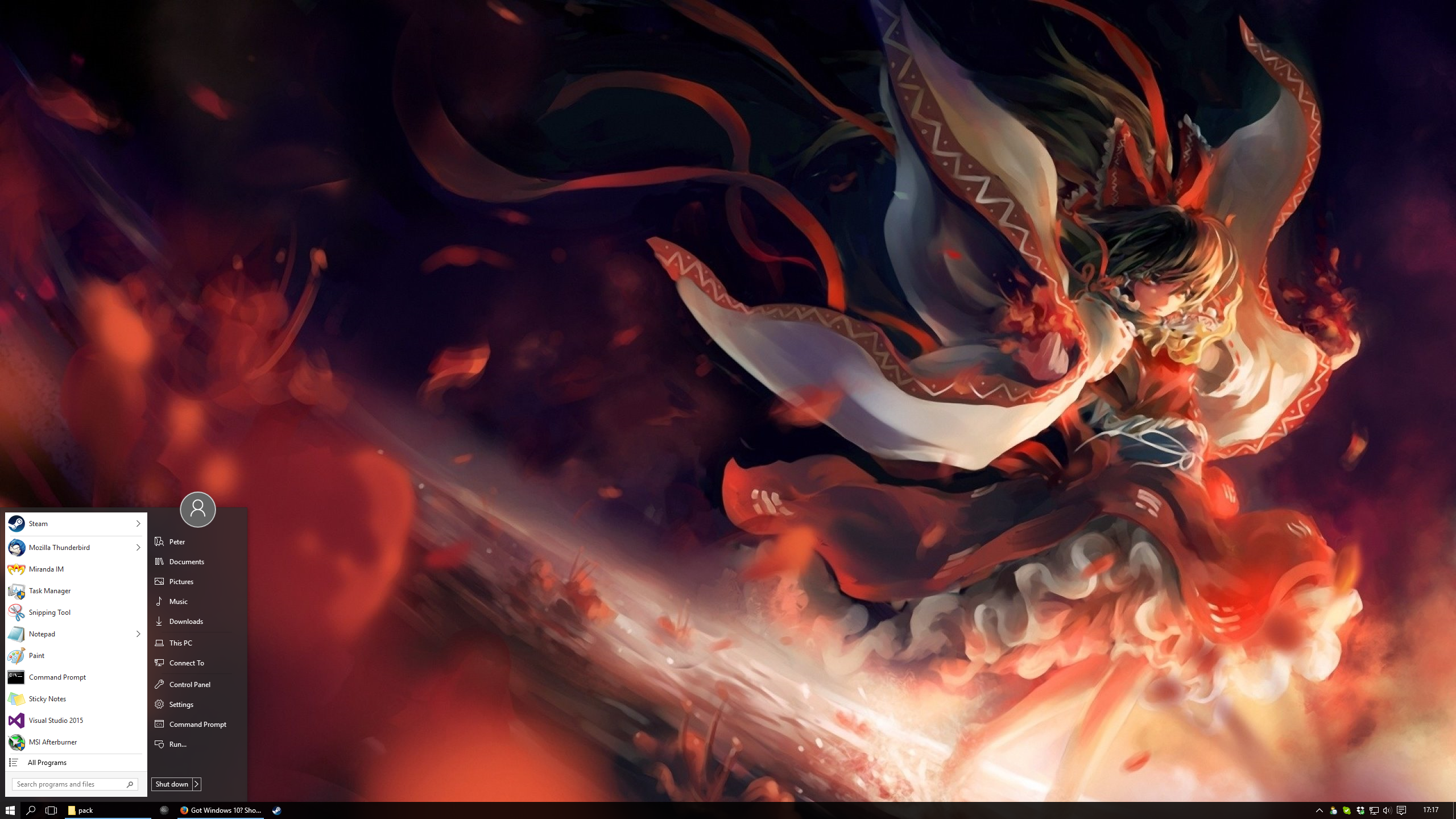 Let’s start with an amusing one: Skype would crash every time I logged out of Windows 10. The amusing part here is that Skype is now owned by MS, so’ you’d assume that they’d get compatibility right. After a lot of googling, it’s apparently an issue where the sound driver gets unloaded before skype does, and it crashes when trying to play the logout sound. Go figure. The fix is to disable that sound.

There are also various incompatibilities with DirectX pre-9 games and fullscreen mode, resulting in flickering. In most cases I’ve encountered, forcing borderless windowed mode seems to work around those.

What’s nice is that it seems GeDoSaTo is compatible with Windows 10 out of the box, and so is PtBi.

This has been a sporadic issue that seems to have stopped completely now, but for a while I was getting completely nonsensical CPU usage reports in task manager.

In complete idle state, my CPU was apparently running at ~30%. At least according to the new “Processes” view in task manager. “Details” was showing 97%-99% idle, and Process Explorer, which I trust more than both of them, agreed.

In the process of converting general windows default utilities to “apps”, it seems that almost invariably functionality is lost — often important functionality. The new “Photos” app apparently can’t even show images at 100% zoom with a simple click, and mouse wheel zoom is completely broken. I find that unacceptable.

Luckily, Windows 10 still ships with the old Photo Viewer. Because it’s MS though, that Photo Viewer is not an executable but rather a dll which needs to be hosted and invoked somewhere, so it’s hard to associate with images in Windows 10. To work around this I’ve created PhotoviewerWow.exe. It merely invokes the existing .dll, and should work on Windows 10 64 bit installations. Just put it somewhere permanent and you can easily associate it directly with image files. (The name is a homage to the insane hoops MS jumps through to run Windows32 on Windows64, since I also had to jump through hoops to run a standard Windows feature on the new Windows)

Another thing about appification that might be even more worrying is that apparently you aren’t even trusted – as an administrator no less – to look at your own apps’ files (hidden away in “Program Files/WindowsApps”). That’s just ridiculous. And worrying.

Well, I guess the new built-in virtual desktop support is neat, and they chose exactly the keyboard shortcuts for it that I would have chosen intuitively (Win+Ctrl+D, Win+Ctrl+Left/Right). So good job on that. And I also like the improvements to the “move window left and right” workflow, where it now shows you a selection of the remaining windows to move to the other half of the screen after you used Win+Left/Right to move one window. It’s also not quite as fugly as Windows 8, and it makes it rather easy to mostly ignore the entire app crap after installing StartIsBack.