Since the last time I wrote about GeDoSaTo, there have been quite a few changes/improvements. The full changelist is on Github (basically everything under the beta 20 and beta 21 headings), but I feel like some things need further explanation.

Multiple PSHashes can now be specified

This means that it’s easier to get perfect coverage of post-processing injection and hudless screenshots in more games, more situations , and with a larger variety of settings, with a single uniform profile.

It works like the PSHash system, but when the hash is encountered AO is applied (with the GenericDepth plugin). This means you can inject AO before the game renders things like volumetric fog, particles or light overlays: 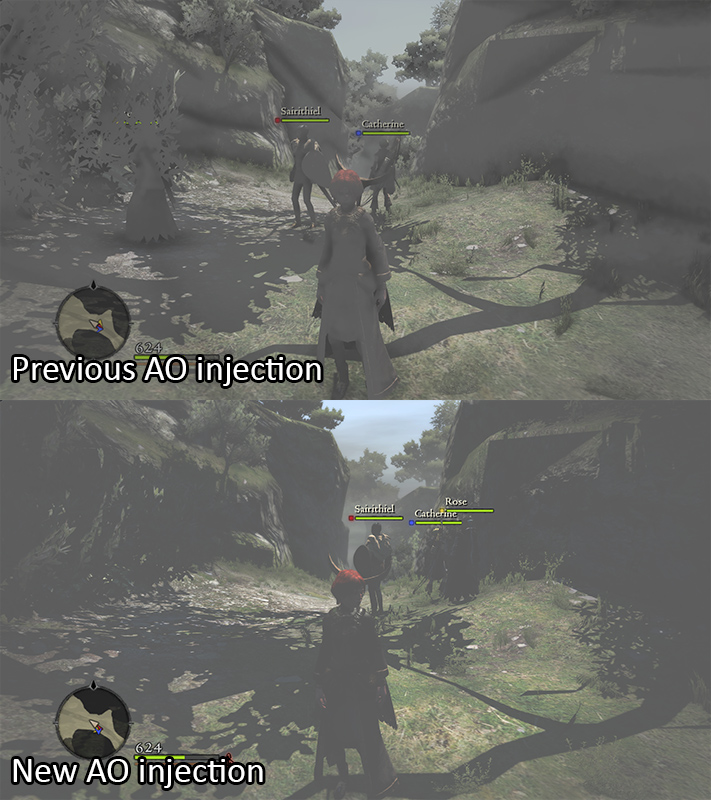 The way both of these features work is illustrated by the new default profile for Dragon’s Dogma:

I also implemented a depth-based fadeout for AO, this helps work around issues with fog which are not resolved by the new hash targeting ability. You can currently configure it directly in the SAO shader. (Which you can of course customize for each game profile like any shader)

Combining AO hash targeting and the fade-out, it’s possible to get artifact-free AO in e.g. Dragon’s Dogma, which was my main test case.

Rather than pushing every effect into a single shader (which simply doesn’t even work for some combinations) you can now specify an additional postprocessing pass with e.g. addProcessingPass deband.fx in any settings file. Currently, only the deband shader has been separated out, and you can look at its source here. The system is still not as flexible as I’d like it to be (in order to be able to implement more complex effects without changing GeDoSaTo), but it’s a pretty significant step forward.

You can get the latest version by updating from within GeDoSaTo or with the installer provided here. As always, you can donate to support continuing GeDoSaTo development here.

And yes, I know that this is not the DX11 support that everyone is asking for all the time. Sadly, that’s on a different level of engineering time requirements.